The Ghalian Code by Scott Baron 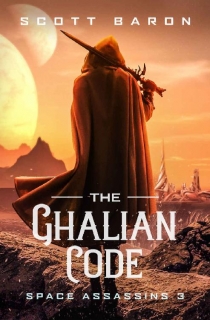 Some might say there is no honor among assassins.
That might be true of many, but not the Ghalian.
A debt had been called in, and the code dictated it must be repaid, even if the timing did happen to be incredibly poor. But once the dangerous endeavor was undertaken and the wheels set in motion, what at first seemed to be a mere task of honor soon revealed itself to have far greater repercussions than expected.

The quest would be a harrowing effort for even the most skilled members of the order of assassins, and their success or failure could very well shift the balance of power in the entire galaxy.