The Genesis Engine by Jim Keen 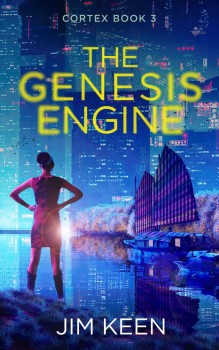 A fallen U.S. government. A city verging on collapse. Can a lone cop stop an insane crime lord from destroying the home she’s vowed to protect?

2059. NYPD cop Alice Yu trusts no one. And with newfound fame making her a reluctant figurehead, there’s no way she’s telling anybody that her reprinted body is failing and she’s dying. But when she hosts a city-saving truce between gang bosses and the police, a bloody confrontation leads to an enraged standoff.
With negotiations stalled, Yu partners with a secretive UN special agent to track down the power-hungry monster intent on destroying the decaying metropolis. But as the fiend remains elusive and a growing AI threat endangers the entire planet, she must push herself harder than ever before to save the city before her own clock hits zero…

Has Yu got enough life left to prevent a shadowy enemy from bringing New York to its knees?