The Garbage Man by Candace Irving 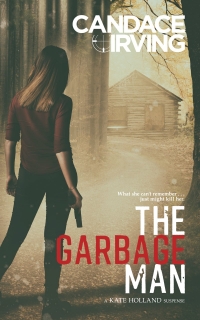 What she can’t remember…just might kill her.
Former US Army detective Kate Holland spent years hiding from the world—and herself.
Now a small-town cop, the past catches up with Kate when the body of a fellow Army veteran is left along a backcountry road…in meticulously severed pieces.
Four years earlier, Kate spent eleven hours as a prisoner of war in Afghanistan. According to her Silver Star write-up, she singlehandedly took down eleven terrorists to avoid staying longer.

But Kate has no memory of the deaths, or the events that led up to them.
And now, bizarre clues are cropping up in and around that crime scene—and others. Clues that appear to connect to that fateful day. Is the killer trying to tell her something?

Or is Kate finally losing her grip on reality?
As the body count rises, Kate is forced to confront the guilt that caused her to bolt from the Army…along with the realization that, if she’d faced her demons sooner, her fellow vets might still be alive—and she wouldn’t be in the killer’s crosshairs.