The Game by Luca Veste 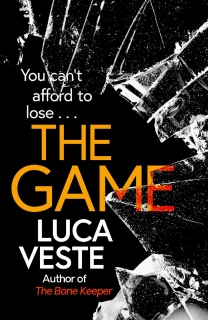 THEY KNOW WHAT YOU DID.
You receive a call, an email, a text – someone knows your secret and they want to ruin you.
AND THEY’RE OUT FOR BLOOD.
If you don’t do what they say, they’ll tell everyone what you’ve been hiding.
They will come after you, destroy you, and they aren’t afraid to kill.
IT’S TIME TO PLAY THE GAME.
An edge-of-your-seat thriller that merges the twists of a psychological-mystery with the investigative layers of a procedural . . .

Luca Veste is a writer of Italian and Liverpudlian heritage, married with two young daughters, and one of nine children. He studied psychology and criminology at university in Liverpool.
He is the author of the Murphy and Rossi series, which includes DEAD GONE, THE DYING PLACE, BLOODSTREAM, and THEN SHE WAS GONE.
Part psychological thriller, part police procedural, his books follow the detective pairing of DI David Murphy and DS Laura Rossi.
The novels are set in Liverpool, bringing the city to life in a dark and terrifying manner…with just a splash of Scouse humour.