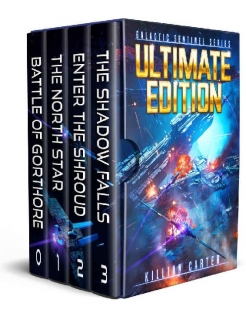 Killian Carter was born with a blaster in his hand (it was a complicated delivery) and grew up hunting cyborg aliens and a variety of extradimensional beings. He specializes in tracking and capturing space-ware-vampire-ninjas aka the TRAPPIST-1e leprechaun. Killian is well versed in the use of advanced photon weaponry, intergalactic quantum spacecraft, and a wide range of technology the government doesn’t want you to know about. On weekends, Killian likes to kick back with a space-beer and a top-secret data crystal he stole from the REDACTED archives. Killian is rarely seen without his automaton chihuahua, Tequilabot.

#0 – Battle of Gorthore
Confederation Marines brave the narrow line between light and shadow. Under the gaze of death, they battle humanity’s greatest foes. For the greater good, they give their years and sometimes their lives. By all accounts, Confederation Marines are heroes.
At least, that’s what the recruitment flyer said. But crouched inside a cramped bomber-class service tube, Lance Corporal Grimshaw wasn’t feeling very brave. And he sure as hell wasn’t a hero.

#1 – The North Star
An ancient alien race. A sentient monkey. An epic adventure.
Jason Grimshaw has one job. Get the cadets to Colony 115. Just another day. Just another milk run.
Or so he thought.
When scanners pick up an unidentified alien vessel, it’s already too late. With his ship blown out from under him, and his crew scattered across a war-torn planet, his day just keeps getting better. The good news? One of the pilots survived. The bad news? She’s the biggest pain in his ass, and she’s stranded miles away.
When Clio Evans said she wanted to fly for Fleet, crash-landing a starship in hostile territory wasn’t what she had in mind. She may not be the most experienced pilot, but she sure as hell has a few tricks up her sleeve. With an army standing between her and the rest of her crew, she’ll have to pull out all the stops, even if it means exposing a secret that’ll see her hanged for treason.

#2 – Enter The Shroud
They handed Grimshaw grenades and asked him to make lemonade.
Get the North Star to the Galactic Sentinel, sign off with the Galactic Council, and return to Fleet Academy Four.
It should have been easy, but compared to the Galactic Council, Earth’s politicians are girl scouts selling Peanut Butter Patties to their grandmothers.
Widespread riots and whispers of Chimera terrorists only make matters worse, especially when the terrorists are better armed than most of Sentinel Security.
Grimshaw wants to stop the Chit invasion, but he needs the arrogant Galactic Council to help. Evans is tired of being cooped up and is dying to kill some Chits. All Taza wants is another bottle of brandy.
Instead, they’re up against forces that make the Underways crime bosses and Aphnai invaders seem like a walk in the park.
Whether they like it or not, our troublesome trio are strapped to a galactic rollercoaster stacked with powder kegs about to explode.
Climb on board, keep your arms and legs attached to your torso at all times, and enjoy the ride.

#3 – The Shadow Falls
They made it this far, but even heroes can’t last forever.
Grimshaw leads the North Star crew on their most daring mission.
When an ancient disease threatens to wipe out one of their few allies, Captain Grimshaw and Lieutenant Evans travel deep into enemy territory in search of a cure. The Kragak still lay dormant. Who knows what’ll happen if the slumbering giants are disturbed?
Meanwhile, Taza remains in the Shroud as he investigates a string of murders that could be linked to the deadly virus.
Explorer-class vessels have already begun to report sightings of Aphnai war ships on the Fringe. It’s only a matter of time before the invaders arrive, and the crew of the North Star are the only ones who can stop them.
Once again, our troublesome trio are thrown into the fray. They’ve made it this far, but they haven’t yet fought the Kragak, and not all is as it seems.