The Frozen Girl by Roberta Gately 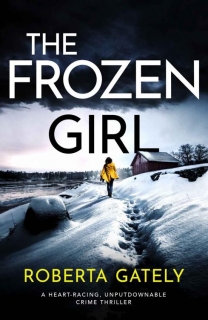 The young woman’s mouth is slightly parted, as if waiting to speak. Her body is frozen in ice and her blue eyes stare at the sky, perhaps wanting to look at the stars one last time…

When the body of a woman is found in the frozen Neponset River, just where it meets the sea, Jessie Novak and her partner Detective Sam Dallas rush to the scene. When Jessie sees a flash of a familiar silk scarf, she’s shocked to realize the girl in the ice is Sheila Logan, who she worked closely with for years at Boston City Hospital. Jessie desperately wants to find out how this young and talented nurse ended up an innocent victim.

But who would want to kill her? As she digs into Sheila’s past, Jessie realizes she was having an affair with a colleague and may even have been pregnant. Was her lover unwilling to be a father to her child? The pain of Sheila’s death threatens to tear open Jessie’s old wounds—Jessie’s own mother walked out on her when she was just a baby and never looked back. She can’t change her own past, but she’s determined to get justice for Sheila.

When Sheila’s neighbor is found dead, also wearing a distinctive scarf, Jessie sees a lethal pattern forming. Next, someone breaks into Jessie’s car and she knows she’s being warned off the case. But with the killer in her sights, will she take the deadliest risk of her life? Can Jessie catch him, before he catches up to her?