The Frequency by Terry Kitto 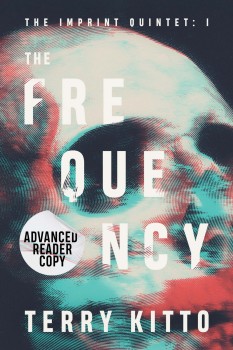 Death wasn’t an absolute end, but a further form of being.

Deep within the bowels of an abandoned Cornish mine a covert occult group, known as the Network, protects the living from the dead. Their mediums host a plethora of abilities — from telepathy to astral projection — because of their connection to an energy source called the frequency.
Fifteen-year-old Rasha Abadi and her mother are Syrian refugees granted leave to remain in Gorenn Village. The seaside town sprawls with beaches and idyllic coves, but the last thing Rasha finds there is peace. An impossible shadow visits her nightly and infests her mind with memories of the chaos that she and her mother fled in Syria. When she becomes possessed by the shadow, the Network intervenes to save her.
The shadow’s wrath knows no bounds and orchestrates a string of interconnected possessions across the south coast. Having survived the shadow, Rasha eagerly offers to aid the Network’s investigation. They must all act quickly to unearth its motive before it disrupts the balance between the living and the dead, and forges a new world from the embers of their own reality.

No choice will be easy for Rasha when thwarting a monster means becoming one herself.