The Freedom Race by Lucinda Roy 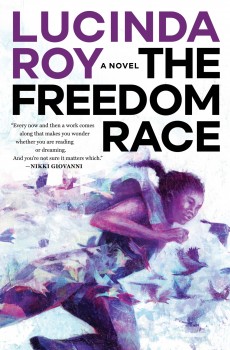 The Freedom Race, Lucinda Roy’s explosive first foray into speculative fiction, is a poignant blend of subjugation, resistance, and hope.

In the aftermath of a cataclysmic civil war known as the Sequel, ideological divisions among the states have hardened. In the Homestead Territories, an alliance of plantation-inspired holdings, Black labor is imported from the Cradle, and Biracial “Muleseeds” are bred.

Raised in captivity on Planting 437, kitchen-seed Jellybean “Ji-ji” Lottermule knows there is only one way to escape. She must enter the annual Freedom Race as a runner.

Ji-ji and her friends must exhume a survival story rooted in the collective memory of a kidnapped people and conjure the voices of the dead to light their way home.