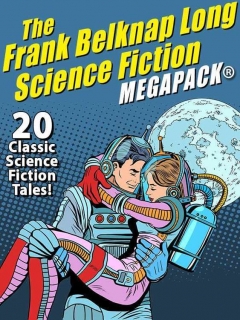 Frank Belknap Long (1901–1994) — one of the early masters of fantasy and science fiction, friend of and collaborator with H.P. Lovecraft — produced hundreds of novels, short stories, and poems throughout his long and distinguished career. From fantasy and horror in Weird Tales to action-adventure science fiction in pulp magazines like “Planet Stories” and “Thrilling Wonder Stories” to more “nuts and bolts” science fiction in “Astounding Stories,” and also work in the romance and mystery fields, his nearly 70-year career is filled with remarkable achievements. He received the World Fantasy Award for Life Achievement at the 1978 World Fantasy Convention, the Bram Stoker Award for Lifetime Achievement in 1987 from the Horror Writers of America, and the First Fandom Hall of Fame Award in 1977. This collection presents 20 of his “golden age” pulp science fiction stories, originally published from the 1930s through the 1950s.

Included are:
AN AUTOBIOGRAPHICAL MEMOIR
THE LAST MEN
GREEN GLORY
CONES
THE SKY TRAP
WOBBLIES ON THE MOON
THE CRITTERS
FILCH
THE TRAP
GUEST IN THE HOUSE
LAKE OF FIRE
THE WORLD OF WULKINS
THE MISSISSIPPI SAUCER
LESSON IN SURVIVAL
THE SPIRAL INTELLIGENCE
THE CALM MAN
MAN OF DISTINCTION
THE MAN FROM TIME
GOOD TO BE A MARTIAN
THE SPECTACLES