The Forum by Marie Reyes 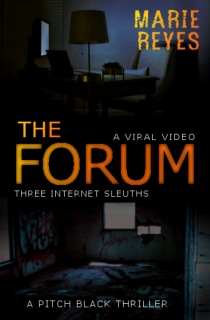 A viral video. Three Internet sleuths. A race against time.
Unemployed, and recovering from a prescription drug addiction, Piper spends her days surfing the Internet in her dingy apartment. Martin is fired from his job after suffering with severe anxiety due to his father’s death. Aadesh is struggling to make a name for himself in comedy and to maintain his precarious relationship.

Dissatisfied with their lives, three people devote their time to tracking down an internet killer who posts videos of his vicious murders online. As they investigate, the group grow closer, but tracking down the online killer seems impossible.
One of the victim’s daughters comes to them for help and together, they try to uncover the killer’s identity, a motive, or a link between the victims. Every clue seems to be a dead end. Will they be able to stop the murderer before he claims his next victim?