The Forever Home by Sue Watson 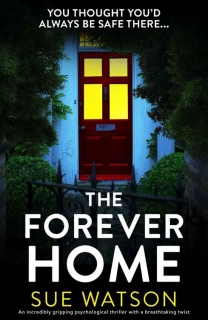 You thought you’d always be safe there… you were wrong.
Carly had thought they’d always live there. The beautiful Cornish cliffside house they’d taken on as a wreck, that Mark had obsessively re-designed and renovated – a project that had made him famous. It was where they’d raised their children, where they’d sat cosily on the sofa watching storms raging over the sea below. It was where they’d promised to keep each other’s secrets…

Until now. Because Mark has fallen in love. With someone he definitely shouldn’t have. Someone who isn’t Carly. And suddenly their family home doesn’t feel like so much of a safe haven.

Carly thinks forever should mean forever though: it’s her home and she’ll stay there. Even the dark family secrets it contains feel like they belong to her. But someone disagrees. And, as threats start to arrive at her front door, it becomes clear, someone will stop at nothing. Because someone wants to demolish every last thing that makes Carly feel safe. Forever.