The Fool’s Folly by Keith Moray 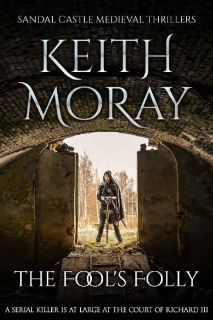 Trust no one…
1485, Yorkshire, England
King Richard III has held the English throne for two years. But the country is rife with rumours about the fate of his nephews, the two princes imprisoned in the Tower of London, and there is a continual threat of rebellion by Henry Tudor.

King Richard’s heir, John de la Pole, presides over the stronghold of Sandal Castle. When a suspicious death occurs in his household, he instructs Sir Giles Beeston, the newly appointed judge, to the Manor Court to investigate.

But before Sir Giles can get to the bottom of the murder, more grisly deaths occur.
Are the deaths connected? Is there a plot against the King?
And can Sir Giles unmask the killer before he too falls victim to the killer…?