The Flying None by Cody Goodfellow 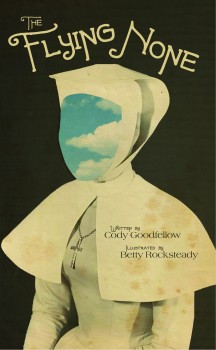 Gala Murowski wasn’t really looking for God when she joined her local nunnery, but when an ecstatic out-of-body experience sets her spinning through a godless cosmos, she becomes an avenging angel on a rogue crusade against the hypocrites who prey on the innocent in His name.

Believing only in herself, Gala proves that while faith may move mountains, only doubt dethrones douchebags. But her reign of unholy terror makes her an outlaw and plays into the hands of fanatics hell-bent on making her into the deity she doesn’t believe in…and a tool to remake the world in their image.