The Find by Cliff Allister 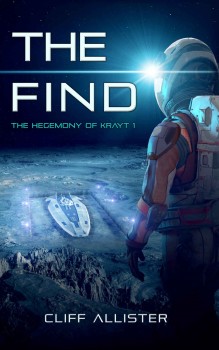 In the year 2087, helium-3 miners on the Moon discover an ancient alien spaceship. The consequences of this find for mankind, which is still divided into competing and even hostile nations, are paramount. An international team of scientists succeeds in rendering the ship largely functional again. But its superior hyperdrive attracts the attention of extraterrestrial forces, which claim the spaceship, called the Golden Nova, for themselves. The ship could be the key to humanity’s survival in a cosmic conflict that has raged for millennia – or lead to its demise.

Can Alexander Walker, the commander of the Golden Nova, overcome the tensions and distrust in his international crew? Does the crew of the Golden Nova stand a chance against the invasion fleet that enters the solar system and threatens to turn Earth into a disenfranchised galactic colony? However this ends, it is a dramatic turning point in human history.