The Final Lie by Lily Campbell 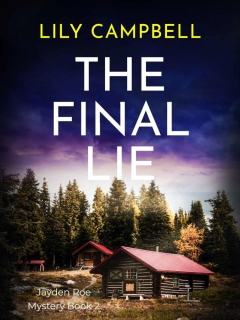 With the bodies piling up, his girlfriend’s life hangs in the balance.
Fresh out of prison and with his girlfriend mysteriously missing, Jayden Roe is once again thrust into a dangerous world of kidnapping, murder, and conspiracy. Teaming up with an unlikely and unassuming ally, his investigation soon brings him under the thrall of the infamous Serpent Twins of the Louisiana underground.

As he struggles to unravel the mystery behind his girlfriend’s disappearance – and the elusive mastermind behind it – Jayden is brought face-to-face with old friends, enemies, and the most puzzling case he has ever encountered.

And when bodies begin piling up and his leads start getting picked off one by one, it quickly becomes clear that Jayden is up against a rival more cunning and bloodthirsty than he ever could have imagined. Fighting a race against time to find his girlfriend before it’s too late, Jayden must use all of his wits if he wants to figure out who he can trust and bring his girlfriend home safe.
Can Jayden uncover the truth behind the kidnapper? Or will this private detective have finally met his match?