The Final Hours by David Menon 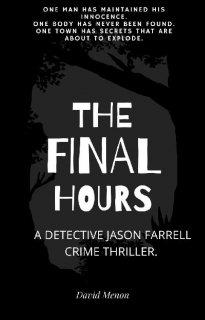 One man has protested his innocence for over forty years.
One body has never been found.
One town has been hiding deadly secrets for decades.

Wayne Portman is released after spending forty years in prison for a double murder in the town of Kingsbrook, New South Wales, back in 1977 and for which he has always maintained his innocence. One of the bodies, that of his girlfriend at the time, Fiona, has never been found. Wayne had been a bright scholar who had been set to do well at university. He was known as a kind and gentle soul, not one given to losing his temper sufficiently to commit murder. .

Shortly after his release, Detective Jason Farrell is appointed as the senior at the Kingsbrook police station. But when murder strikes Kingsbrook again, Farrell spots a glaring parallel with the crimes of 1977 that make him re-open that original case and begin to believe that Portman may have been right to have always claimed to have been innocent.
His investigations begin to reveal some very dark secrets and before he knows it Kingsbrook is rocked by a past it has never faced up to.
But will he be able to stop further murders before he can finally get to the heart of the truth?