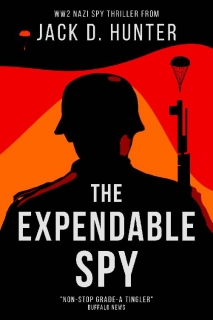 Caught between three sided war, once belonging to one side, now his only goal in life is to survive.

When American GI Peter Klaussen is dropped into Nazi Germany his mission is swiftly bungled by Allied bombing, killing his contact and destroying his car. Rising from the rubble the only thing for it is to improvise. He takes his contact’s papers and prays his new identity, Heinz Jaeger, will get him through what’s left of the war. As it turns out the masquerade is brilliant. So brilliant he’s a rising star in the Gestapo firmament. Even London is ordering his execution.

Against the background of a deadly undercover war between the Gestapo and Soviet agents during the collapse of the Third Reich, The Expendable Spy’ is a hair-raising novel of an audacious American who discovers a secret so big and so appalling that his own intelligence office want him dead.