The Exfiltrator by Garner Simmons 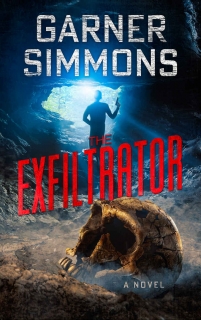 32,000 YEARS AGO: High in the Pyrenees Mountains in what is present day Spain, a young Neanderthal is pursued and mortally wounded by a Cro-Magnon hunting party. Attempting to escape his attackers, he seeks refuge in a cave. TODAY: In the holy city of Najaf, a powerful Iraqi cleric has been critically wounded in an ISIS terror attack. If he dies, peace and stability in the region die with him.

The only hope rests with his son, Tariq, who has currently gone missing somewhere in the Basque mountains north of Madrid. With time running out, the CIA turns to — MICHAEL CORBETT.American by birth and Oxford-trained, Corbett is a world-class archeologist. But to the CIA, he is an “exfiltrator,” a freelance operative who specializes in locating and extracting high value targets under extreme duress. Having been hired by the University of Salamanca to lead an archeological team into the Pyrenees to explore a newly discovered cave that may be the last redoubt of the Neanderthals, he accepts the CIA’s assignment. But there are complications… At Oxford, he and Tariq were friends. Today Tariq is believed to be living with a woman, a doctor named Amaia, who runs a free clinic in a remote Basque village. She was also once Corbett’s lover. At the same time AN ISIS TERROR CELL begins tracking Corbett believing he will lead them to Tariq. Religious fanatics, they are obsessed and will stop at nothing from carrying out the “Will of God.” Racing against time and the Terrorists, Corbett must find Tariq and exfiltrate him…before ISIS takes his head!