The Evidence by Jodie Lawrance 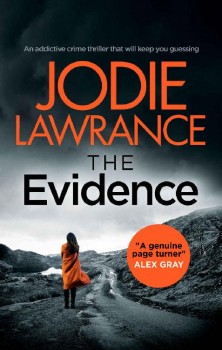 SHE’S OUT OF UNIFORM BUT SHE’S STILL IN THE LINE OF FIRE.
Detective Helen Carter is called to a crime scene: a barmaid, Tina French, has been strangled. Murdered on her way home from work to look after her sick son.
Meanwhile, Moira McKenzie leaves her lover’s townhouse and gets home to find her abusive husband, Reggie, washing blood from his hands. Later, in their garden shed, she finds incriminating photos, keepsakes and newspaper cuttings about old murder cases.

When the police are called to their home, they find a pool of blood and a shattered glass table, but no sign of Moira . . .
Helen knows what it’s like to be victimized. She’s still recovering from her last case and avoiding her fiancé’s calls. Now she needs to stop the person terrorizing the women of Edinburgh.