The Entity Game by Lisa Shearin 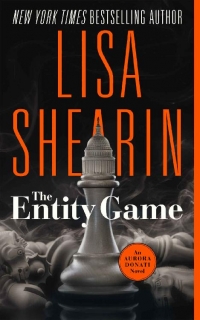 A powerful United States senator and his aide die in their office of cardiac arrests. The next day, a second senator dies of an aneurysm. Officials declare their deaths natural causes, but the FBI fears there is something sinister happening on Capitol Hill and looks to psychometric detective Aurora Donati to investigate. Rory’s ability to get information from people or objects with a single touch uniquely qualifies her to explain the inexplicable. Only this time, she begins to wonder if she is up against forces that no one has ever encountered before.

The next attack strikes close to home and turns Rory’s world upside down. She finds herself entangled in a deadly mix of terrorists, corrupt politicians, and secretive intelligence agencies in a web of deception and conspiracy dating back to experiments performed in a Cold War-era Soviet laboratory and perfected by modern science.

Someone else is pursuing the truth: Gabriel Marshall, CIA operative, who has an agenda and abilities of his own. They find themselves locked in a deadly game, stalked by a seemingly supernatural assassin who puts Rory and Gabriel’s abilities to the ultimate test in a deadly duel. Time is running out and Rory must counter each move and play the game to its heart-stopping end in the halls of the US Capitol itself.