The Endgame by S. Hussain Zaidi 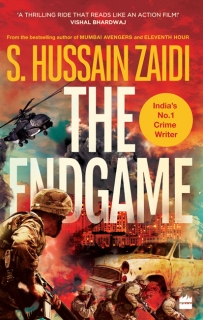 It’s been three years since Shahwaz Ali Mirza and Vikrant Singh foiled dreaded terrorist Munafiq’s attempt to leak State secrets from a naval server in Lakshadweep. Now posted with RAW, they have the task of providing security for BSF Special Director General Somesh Kumar, on his way to visit former Prime Minister Parmeshwar Naidu, who has been hospitalized after a car accident.

However, Kumar’s convoy is attacked by terrorists. They manage to kill him before being gunned down themselves. A tip-off leads the duo to a hotel on Mira Road where the prime suspect, Al Muqadam, is hiding. Vikrant recognizes him as Ayyub, the brother of one of his long-time informants, Mazhar Khan. Just when it looks like things can’t get more difficult, Major Daniel Fernando gets in touch claiming that there is more to Naidu’s accident than meets the eye. Soon, the entire team from the Lakshadweep operation finds itself getting together for a new mission…