The Edge Of The Universe by Andrew Maclure 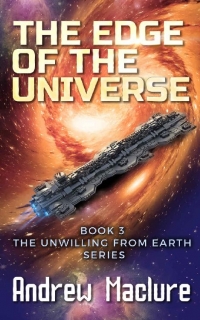 The team are fresh back from Tefran and their part in helping Hess An Sur, First of the First Family of the Herassan Federation, emperor and absolute ruler of the Herassan Empire (AKA Mike), change the Empire to a republic. They are enjoying what Mark thinks is a well earned break on the resort planet of Hedonis. ‘Enjoying’, maybe the wrong word. Sally doesn’t like the crowds, Simon is miserable, and Mike spends every night in lockup. Mark is having a great time. Sally decides it’s time to leave.

Back on the Swift, Alan and Bob meet with Sally and Mark to offer them the opportunity to fight a war in a distant galaxy against an enemy with an experienced and well-armed military who massively outnumber Sally’s army and have a huge and sophisticated space navy. They use weapons technology that has followed a different development path to that used by civilisations in the Milky Way galaxy, with weapons that Sally’s army have little or no defence against. Or, they could do the sensible thing and stay at home.

Sally has issues, Mike forgets there is a line she shouldn’t cross, Mark develops as a commander, Simon misbehaves, Kar Fen builds bridges, Seltet reveals her true self, Brog gets a dose of reality.
Edge Of The Universe continues the story of Mark and his predicted journey to become a great warrior and commander from his less than auspicious life on Earth.
Although – he is still not very willing.