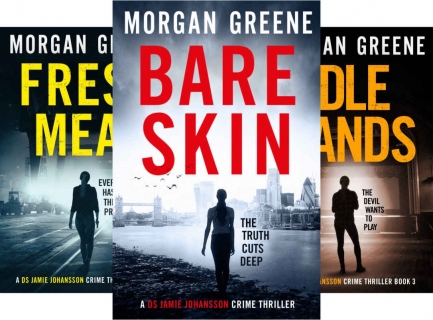 Book 1: Bare Skin
A tortured murder victim, a growing drug problem, and a string of missing homeless. Something terrible stalks the streets of London, and there’s only one person who can stop it…
DS Jamie Johansson and her partner are called in to investigated the body of a homeless boy washed up on the river banks. His hands are bound, fingernails ripped off, and the track-marks in his arms all point to a drug-debt come calling. An open and shut case.
But something doesn’t feel right to Jamie, and she isn’t about to let this one go. Something terrible is going on, and Jamie may be the only one who can stop it.

Book 2: Fresh Meat
A young pregnant woman has been gunned dead.
One shot to the back. Left to bleed out. She has no ID, no name. No witnesses have come forward. No family has claimed her body. And there’s no sign of the father.
The investigation is stalled with no leads and the detectives working the murder want to wash their hands of it before they cross the wrong person. But Jamie doesn’t shy away from a case. No matter whose cage it rattles. And as she begins to close in on the animals responsible, she comes to see how brutal they really are. And when cornered, how quickly they’ll bite back…

Book 3: Idle Hands
A prodigal young violinist has been brutally murdered. Her hands cut off, and stolen…
What the killer wants them for, Jamie can only begin to imagine. But no matter what she thinks of it, it doesn’t compare to the twisted and bloody plans being laid by a killer unlike any she’s dealt with yet.
Jamie hasn’t faced evil like this before, but she is beginning to understand it. To know it. And that is what scares her most of all…