The Disappearing Act by Catherine Steadman 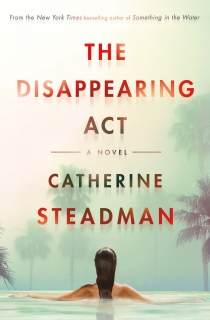 A British actress discovers the dark side of Hollywood when she is the only witness to the sudden disappearance of a woman she meets at an audition in this psychological thriller from the New York Times bestselling author of Something in the Water and Mr. Nobody.

Once a year, actors from across the globe descend on the smog and sunshine of Los Angeles for pilot season. Every cable network and studio looking to fill the rosters of their new shows enticing a fresh batch of young hopefuls, anxious, desperate and willing to do whatever it takes to make it. Careers will be made, dreams will be realized, stars will be born. And some will be snuffed out.

British star Mia Eliot has landed leading roles in costume dramas in her native country, but now it’s time for Hollywood to take her to the next level. Mia flies across the Atlantic to join the hoard of talent scrambling for their big breaks. She’s a fish out of water in the ruthlessly competitive and faceless world of back-to-back auditioning. Then one day she meets Emily, another actress from out of town and a kindred spirit. Emily is friendly and genuine and reassuringly doesn’t seem to be taking any of it too seriously. She stands out in a conveyor-belt world of fellow auditionees. But a simple favor turns dark when Emily disappears and Mia realizes she was the last person to see her, and the woman who knocks on Mia’s door the following day claiming to be her new friend isn’t the woman Mia remembers at all.

All Mia has to go on is the memory of a girl she met only once . . . and the suffocating feeling that something terrible has happened. Worse still, the police don’t believe her when she claims the real Emily has gone missing. So Mia is forced to risk the role of a lifetime to try to uncover the truth about Emily, a gamble that will force her to question her own sanity as the truth goes beyond anything she could ever have imagined.

Actress and author Catherine Steadman has written a gripping thriller set in a world close to home that asks the question: In a city where dreams really do come true, how far would you go to make the unreal real?