The Devil You Know by James P. Sumner 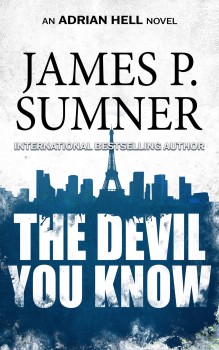 The new age of global peace continues, spearheaded by the combined efforts of the U.S. government and GlobaTech Industries. But a storm is coming that will threaten everything people have worked so hard to rebuild. When the president commissions a new initiative to help lead the charge, there’s only one man he wants for the job.

Having barely recovered from the recent events in Tokyo that saw him almost killed, Adrian Hell is summoned to Washington. Desperate to finally leave his old life of violence behind him, the legendary assassin is called on to serve his country and fight to protect the world he inadvertently helped create.

Torn between his desire for a peaceful retirement and the irresistible urge to do what’s right, he realises his toughest choice is really no choice at all.