The Descent by Matt Brolly 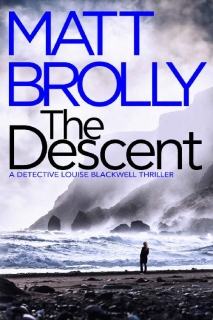 Were they pushed to the edge—or over it?
In the quiet coastal town of Weston-super-Mare, a body is discovered at the foot of a cliff just months after a near-identical tragedy—and Detective Inspector Louise Blackwell can’t believe it could be a coincidence.
Next to the body, she discovers a note that echoes one found beside the first: Death is not the end. Louise is certain that behind these desperate acts someone is pulling the strings, but how many more will plunge to their demise before she can find out who—and why?

Struggling to stay focused under the strain of her troubled brother’s disappearance with his young daughter, Louise hits a much-needed breakthrough when a third tragedy points to the involvement of a charismatic cult leader. The suspect is within her sights, but he knows she’s on to him…
Short on proof and with the body count rising, can Louise intercept his deadly mission—or has she taken on an unbeatable foe?