The Darkling Halls of Ivy by Lawrence Block 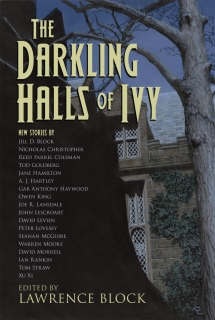 A Mystery Writers of America Grand Master, Lawrence Block is a four-time winner of the Edgar Allan Poe and Shamus Awards, as well as a recipient of prizes in France, Germany, and Japan. The author of more than fifty books and numerous short stories, he is a devout New Yorker who spends much of his time traveling.

Requiem for a Homecoming by David Morrell
An Even Three by Reed Farrel Coleman
Writing Maeve Dubinsky by Jane Hamilton
Alt-AC by Warren Moore
Einstein’s Sabbath by David Levien
The Degree by Joe R. Lansdale
Rounded with a Sleep by A. J. Hartley
The Reasoners by Ian Rankin
Noise Cancellation by Tom Straw
Monkey in Residence by Xu Xi
Bertie and the Boat Race by Peter Lovesey
That Golden Way by Owen King
With Footnotes and References by Gar Anthony Haywood
Penelope McCoy by Nicholas Christopher
Tess and Julie Julie and Tess by Jill D. Block
Why She Didn’t Tell by John Lescroart
Foundational Education by Seanan Mcguire
Goon #4 by Tod Goldberg