The Darkest of Nights by Douglas Adkins 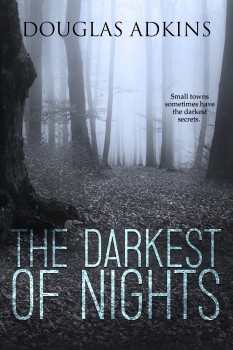 When the small Appalachian town of Willow Creek is stunned by a well-planned bank robbery that leaves one man dead, Jim Porter, the county sheriff is determined to bring justice to the persons responsible.

Because bank robbery is a federal crime, Special Agent Emily James of the F.B.I, along with a task force, shows up and takes command of the investigation to the dismay of Sheriff Porter. Undaunted, he continues his investigation while working with the F.B.I and the state police. With little to go on and tensions sometimes reaching the breaking point, the officials must learn to band together in order to solve the crime.

The four men involved in the robbery are lead by prison hardened Landon Jackson. Although their plan did not go completely according to design, they feel like they pulled it off. However, things are never what they seem.