The Dark by Jeremy Robinson 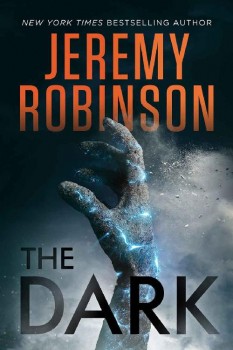 THERE SHALL COME OVER THE WHOLE EARTH,
AN INTENSE DARKNESS LASTING THREE DAYS AND THREE NIGHTS.
Miah Gray is a twenty-seven-year-old, former Army soldier living in rural New Hampshire with his sister, mother, and her boyfriend. He is plagued by PTSD, finding solace, but not redemption, with the aid of prescribed cannabis. All he wants to do is get high, relax with a good sandwich, and watch a meteor shower with his neighborhood crush–Jen.

HE WHO OPENS HIS WINDOW OR DOOR OUT OF CURIOSITY,
OR LEAVES HIS HOME, WILL FALL DEAD ON THE SPOT.
But when the sun’s light is blotted out the following morning, and the world is plunged into darkness, Miah finds himself locked down with his family, covering windows with trash bags, lighting candles, and following the arcane rules of an ancient prophecy. But there is no escaping what comes next.
THE AIR WILL BE INFECTED BY DEMONS,
APPEARING IN ALL SORTS OF HIDEOUS FORMS.

A brilliant flash of light fills the sky, leaving Miah changed, and an Old Norse death rune etched onto his forehead. He fears he has been marked for death until the neighborhood’s parents start disappearing, and he’s left behind. Leading Jen and a ragtag group of parentless kids, Miah hunts for answers and for their parents, while trying to keep his sister safe. He charges headlong down a path that will take him to the gates of Hell–and then straight through.
ALL OF HELL WILL BE LET LOOSE.