The Dark Archive by Genevieve Cogman 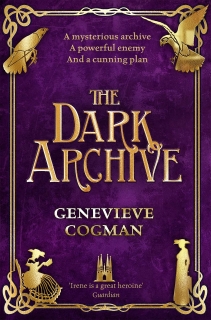 A professional spy for a mysterious Library which harvests fiction from different realities, Irene faces a series of assassination attempts that threaten to destroy her and everything she has worked for.

Irene is teaching her new assistant the fundamentals of a Librarian’s job, and finding that training a young Fae is more difficult than she expected. But when they both narrowly avoid getting killed in an assassination attempt, she decides that learning by doing is the only option they have left – especially when the assassins keep coming for them, and for Irene’s other friends as well…

In order to protect themselves, Irene and her friends must do what they do best: search for information to defeat the overwhelming threat they face and identify their unseen enemy. To do that, Irene will have to delve deeper into her own history than she ever has before, face an ancient foe, and uncover secrets that will change her life and the course of the Library forever.