The Crossing Point by August Arrea 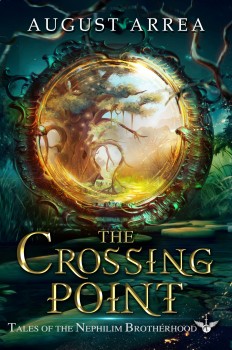 It’s hard enough for a teenager to navigate through his high school years without having to deal with a sudden, unexpected physical change, like say, two pronounced humps protruding from one’s upper back. Now, imagine finding out such an oddity wasn’t just some cruel courtesy of nature, but actually a pair of wings growing just beneath the skin. For Jacob Parrish, this is only the beginning of a sequence of events he suddenly faces after the death of his beloved mother, and he is visited by a mysterious visitor clad in a long, dark overcoat with eyes the color of two golden suns, who not only reveals himself to be an angel (and a fallen one at that), but informs the boy that he is the son of an angel. Naturally, the revelation is met with disbelief until his grandmother reluctantly brings forth a box, secreted away inside an old trunk, that holds the unbelievable truth long kept from Jacob — that he is indeed, a Nephilim.

So begins Jacob’s astonishing journey as he embarks on an incredibly perilous adventure with the mysterious Gotham as his guide. Traveling to the other side of the world, a Gate, hidden in the shadows of an ancient Turkish church, leads the way to a mystical world, where Jacob discovers a treasure trove of abilities he never knew he possessed. While struggling to find the answer to a question purposefully kept from him that has plagued him since he was a small boy, he discovers his birthright and an unforeseen destiny that will change our world.