The Crimson Script by S.J. Hull 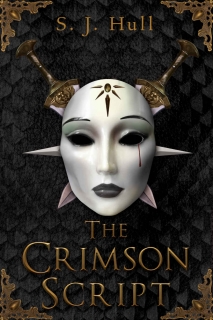 Abys-Luthil is a city that stands upon the brink of civil war. Its halls of power darken with growing plots, and rival gangs terrorise its aged streets. Criminals raid stately homes in search of arcane artifacts, as the city’s nobles withdraw behind their household guards.

Within this city of masks and deceit, Lyra Alpheri moves between the shadows, hunting those who would prey upon the weak. By day she returns to a life of civilised nobility, as the daughter of the renowned magister, Maellon Alpheri. Aided by her friend Kat, and the master of the arcane forge, Virgil, Lyra swiftly brings justice to those who plague the streets. However, it is not long before the political upheaval of Abys-Luthil’s scheming magisters brings trouble to her own home, and after the very fabric of her world is ripped from under her feet, Lyra descends into the city’s depths to wreak a terrible vengeance.

In a journey that runs thick with blood, betrayal and otherworldly power, Lyra walks the darkest of paths, one which soon tests mind, body and soul. But, as the bodies mount, is Lyra in danger of becoming the very evil which she so desperately fights against?