The Courier by Ernest Dempsey 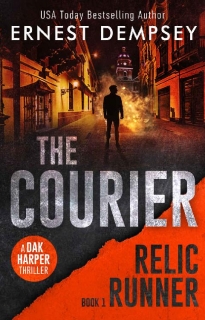 Former Special Forces operator Dak Harper needs a job.
Out of work and on the run after a shocking betrayal by his brothers-in-arms, the ex-Special Forces commando hasn’t stopped moving for months.
He can’t. Some of the same soldiers who left him for dead in the Middle East still want his head. And they’re getting closer.
So far, he’s been lucky. But Dak is low on money and nearly out of time.

All he needs is an easy gig. A place to lie low, bank some cash, and quietly figure out his next move.
That’s not exactly what he finds.
Some rich kid with more money than he knows what to do with wants to open his own museum. But first, he’s got to fill it, and that’s where Dak comes in.
Not sure if his gift for hunting bad guys will translate to finding priceless artifacts, Dak’s willing to give it a shot. He needs this job. The kid will pay him a lot of money and ask no questions.
Before he knows it, Dak’s on the first flight to South America, chasing his big payday. But Dak’s about to trade one set of problems for something even worse: the deadliest mission of his life.