The Courier by CW Browning 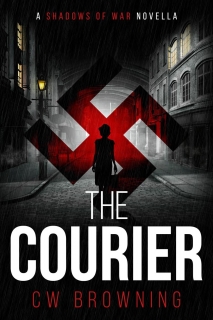 Before there is war, there are those willing to fight…no matter the cost.

France, 1938. While Hitler rebuilds Germany, and French and English leaders focus on appeasement, one man risks everything to smuggle information out of Munich – and into the hands of a young woman.

Evelyn Ainsworth is enjoying a carefree summer with her relatives in the high society of Paris. When her father stops to visit on his way from London to Prague, she never dreams that one favor for him will change her life forever. For beneath the glittering gaiety on the continent, a menacing shadow is growing. While many choose to look the other way, there are some who are desperate to combat the growing evil.

And others even more desperate to empower it.

Offered a chance to make a difference, Evelyn is drawn unexpectedly into a world she didn’t know existed. A world where war is much closer than anyone thinks, information is gold…

…and no one is safe.