The Council of Animals by Nick McDonell 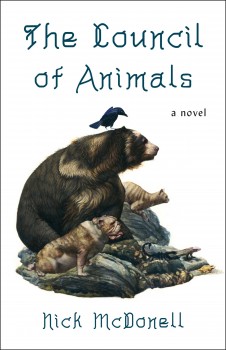 Roald Dahl meets ‘Animal Farm’ in national best-selling author Nick McDonell’s ‘THE COUNCIL OF ANIMALS’, a uniquely witty and waggish fable – with illustrations by Steven Tabbutt – in which a cat, a dog, a crow, a baboon, a horse, and a bear convene to decide on the fate of the few human survivors in a world ravaged by illness and climate change.

First came the pandemic, then came The Calamity. The few remaining humans are huddled in impoverished villages. The animals, meanwhile, have convened a gathering, each group sending a representative to debate and vote on whether to help the last human stragglers… or to kill and eat them.

As each animal makes its case, the fate of humanity depends on whether each species will act in its own self-interest, or if they will follow the lead of the kindly bear who believes that humans can be rehabilitated. The impending decision forces each animal to confront their past traumas at the hands of the humans while also putting them in the position to reign over the other subspecies – rodents and insects – if they so choose. The desire for power, deeply ingrained prejudices, and glimmers of righteousness guide the members of the council as they work to establish a new world order.