The Corrupted Core by John Stovall 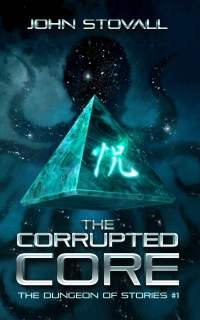 The first rank four dungeon ever born. An unusually talented party of adventurers. Both must face the terror that destroyed the kingdom that came before them.

Will is the newest in a long line of dungeons born into the world—and he’s a rank higher than any dungeon that preceded. He’s born along with seven other dungeons in a small area, but so many dungeons were born in one place because of a magical disaster… A disaster brought about by the Voidbringers who sought to conquer the world.

Now the unthinkable has happened. The Voidbringers have returned, and they have the ability to corrupt dungeons. As a powerful dungeon, Will is one of their targets. He comes under assault by their minions, has to deal with aggressive neighboring dungeons, and of course, adventurers.

With the aid of his dungeon fairy, Amber, and an adventuring party run by Gar Adamant, displaced prince of the kingdom destroyed by the Voidbringers, Will must grow his dungeon to become as strong as he possibly can, grow his nearby town, defend himself and the locals, and fend off the enemies that surround him everywhere.