The Copper Assassin by Madolyn Rogers 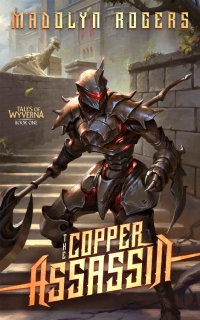 HOW CAN HE STOP THE ULTIMATE ASSASSIN?
In the sixteenth year of its founding, the city-state of Wyverna teems with vitality, rife with crime, secrets, and sorcery. Like its namesake, the wyverns that hunt from the mountains above, Wyverna is a city of predators. Its pirates sail out to plunder the wealth of nations, while at home the capital seethes, an uneasy amalgam of the old ways of its anarchic peoples and the newly imposed rule of law.

The young noble Gorgo navigates these complexities with ease, until one night he learns of a plot to assassinate Wyverna’s legendary founder, the Warlord. The rebels have obtained a mighty relic: an ancient copper golem created to be the ultimate assassin. Invulnerable and relentless, the golem destroyed the civilization that birthed it. If it kills the Warlord, Gorgo realizes his city too will fall, ripped apart by civil war.

Armed with nothing but his wits and his courage, Gorgo sets out to find a way to save Wyverna. His mission will take him from the elegant casinos of downtown to the chaotic docks where smugglers prowl, from the hot sands of the arena to the cold midnight of magic-shadowed streets. But even he cannot foresee where his path will ultimately lead, and to what consequences.