The Constant Man by Peter Steiner 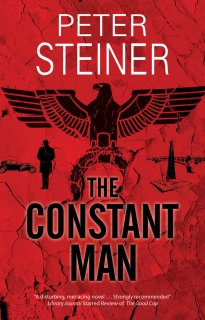 Former Munch detective Willi Geimeiser is a wanted man.
He sacrificed his career and put his life on the line by exposing a high-ranking Nazi official as a murderer, and is now in hiding in a cabin deep in the Bavarian forest.

But when his friend, Lola, is savagely attacked, Willi returns to Munich in disguise and under a new identity – Karl Juncker – determined to find the perpetrator.

Meanwhile, the discovery of the body of a woman in the River Isar leads Willi’s old colleague and friend, Detective Hans Bergemann, to uncover similar disturbing murders stretching back years.
A serial killer who preys on young women is running loose on Munich’s streets.
Could they be responsible for the attack on Lola, and can Willi catch a deranged murderer before the Gestapo catches him?