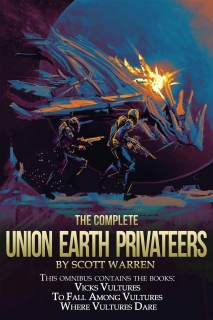 Available as a single volume for the first time ever, the Complete Union Earth Privateers contains all three action-packed, beguiling volumes of interstellar adventure.

Vick’s Vultures
The breakout sci-fi novel that started it all. Vick Marin and the crew of the Condor are on the hunt for advanced salvage and living alien rescues when they happen upon the heir apparent to one of the largest alien empires in the known galaxy. Still hunted by his assassins, Victoria must escape the most ruthless predators the galaxy can conjure up in order to forge new alliances.

To Fall Among Vultures
A trade partner of Earth is under attack, and a xeno officer seeks out Vick Marin to act as forward recon with the Condor. With the promise of a military alliance hanging in the balance, Victoria embarks on a dangerous adventure to confront a species in exodus, only to discover that interstellar genocide is the least of her problems.

Where Vultures Dare
Vick Marin is pulled back into the captain’s chair for a deadly rescue mission, far too dangerous for the Union Earth Navy. The ghosts of Earth’s sins haunt an underground research laboratory on the edge of the human frontier, and Vick must find a way mend broken bonds before petty differences can spell doom for humanity’s neighbors in the stars.