The Collector by John Maher 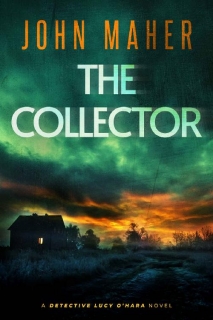 They say human life is the most precious thing. The Collector doesn’t agree.
When world renowned archaeologist Philip Carlton suddenly and unexpectedly commits suicide, the police are called to investigate. Heading up the investigation is Detective Lucy O’Hara, a Forensic Linguist – and she immediately sees something is wrong with the suicide note. In her gut, she knows this was cold-blooded murder.

Battling sceptical superiors and the Irish establishment, Lucy digs for the truth and begins to uncover a shadowy trade in ancient artifacts led by a mysterious figure known only as ‘The Collector’.
As Lucy works to uncover his identity, she soon realises she is up against a ruthless mastermind who is systematically eliminating anyone who might lead her to him. But Lucy won’t give up and soon The Collector turns his attention to her…