The Clinic by Ray Carole 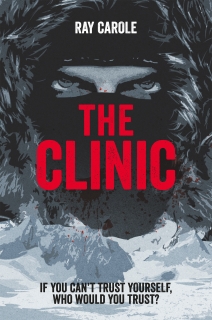 Would you support an illegal programme to destroy terrorism from within?
Three years ago, Harry Decker ran a covert spy cell in Baghdad for the British SAS. A mental breakdown cost Decker his career and almost his sanity. All the other members of Decker’s cell are dead; victims of suicides, random accidents and multiple murders.
In a bid to rebuild his shattered mind, Harry undertakes a record-breaking crossing of Antarctica. However, as he fights for his life on the lethal glaciers, his brain concocts a vast conspiracy theory that might just be true…

When Decker broadcasts his wild theory online, it’s intercepted by a group of men who will go to the ends of the earth to silence him. On the brink of madness can Harry Decker save his sanity and his life, while being hunted by former colleagues who will not hesitate to put a bullet in his head.
Decker hunted people on the kill list, now he’s number one on it.