The City of Dr Moreau by J.S. Barnes 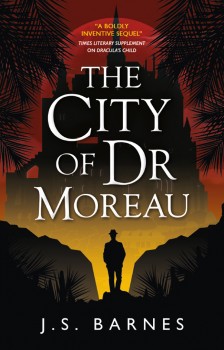 In H G Wells’ The Island of Dr Moreau a shipwrecked traveller finds himself alone on an island ruled by a mad doctor and inhabited by creatures who are at once both beast and human. He escapes…but that is only the beginning of the story.

The City of Dr Moreau is a sprawling history of the islanders, and an alternative vision of our own times. Spanning more than a century, criss-crossing across numerous places and many lives, we witness the growth of Moreau’s legacy, from gothic experiments to an event which changes the world. From the wharves of Victorian London to a boarding house with an inhuman resident to an assassin on a twentieth-century train ordered to kill the one man who knows the truth, we follow secret skirmishes and hidden plots which emerge, eventually and violently, into the open.