The Case Files of Aldicus Vescard by Mark William Chase 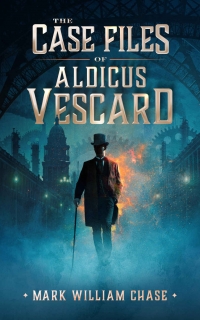 Crime ever turns in the Clockwork City…

Detective Aldicus Vescard knows all too well the monsters and madmen who prowl the fog-veiled streets of Corradon. He is, after all, a monster himself. Cursed in his errant past, his body now harbors a blazing fiend of pure, elemental chaos—kept in check by the bonds that smother his own magical abilities.

But crime ever turns in the Clockwork City, and none are better suited to investigate those most sinister deeds of inscrutable sorcery than Corradon’s greatest detective magus. With his loyal apprentice, Keldon Veldanor, and a host of street-smart allies, Aldicus will face a crucible of sorcery and villainy with only his wits and the science of forensic alchemy to aid him.

Yet, in the decaying depths of the Underworks far below the tick-tock city, there festers an even greater evil—a darkness that threatens not only the unsuspecting denizens of Corradon, but the fate of their entire world.

The Case Files of Aldicus Vescard includes the complete collection of Aldicus Vescard’s case files: 15 detective adventures of magic, murder, and mayhem, culminating in a final showdown against a truly diabolical adversary.