The Callers by Michael McDonnell 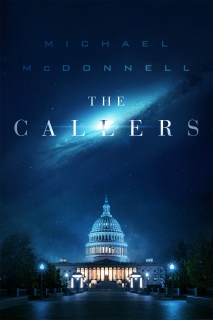 In the novel “The Callers”, the story focuses on the tightly managed, highly classified relationship the US government has had with an Alien Intelligence since the Nixon administration. The Callers (Nixon’s term) reach out to the White House after intercepting transmissions of the original “Star Trek” episodes. They are intrigued by the series and its “Prime Directive”, which resonates with them.

President Nixon and Secretary of State Kissinger, with the help of J. Edgar Hoover, fashion a working relationship with this powerful and unfathomable interstellar civilization. The decades unfold and a status quo is observed, from one administration to the next. Each administration interacts with the mysterious Caller representatives, who are always friendly but enigmatic. Also in this slightly alternate world, the Obama administration is followed by the government of a newly elected Republican President, Steve Rasmussen, a Silicon Valley billionaire, and his assertive Russian emigre Secretary of State, Rose Levchin. They are intent on shaking up the relationship between the US and this Alien entity. Our protagonist, intelligence analyst Ben Stern, and his mentor, Jim Casey – who has been the White House liaison for the Alien relationship all along, find themselves in a quandary. Dr. Jim Casey, a Berkeley professor emeritus of anthropology, and Ben must work and deal with the new President, his gimlet-eyed chief diplomat, and a volatile situation.

The new and unconventional President and his assertive Secretary of State are jostling the applecart. They want alien technology, and know-how. During the scheduled White House meetings, the Caller emissaries, in the form of warm and engaging holograms Jonathan Winter and Steve Allen, show that they may actually not be so tractable. Will they simply become just passive aggressive toward the new administration? Will alien reaction become more intense? Jim and Ben begin to wonder as well… Are Caller motives more along some kind of galactic Peace Corps, or are their intentions more insidious, even sinister? Developments in space and on earth begin to shift things, calling into question everything that had been standard operating procedure. A new relationship in Ben’s life also complicates matters. He is enamored of his new girlfriend, Brenda Donovan, but she is an ambitious television reporter and keen on following good leads. Getting to know Brenda better brings risks. And what else does Brenda know? Everything is in flux. The implications are personal, global, even interstellar.