The Cage by Scott Mariani 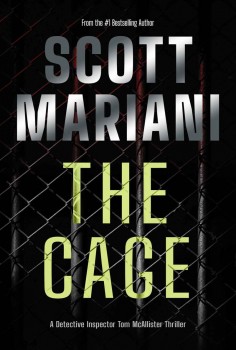 Fans of the multi-million-selling Ben Hope series already know McAllister as the tough, determined Oxford cop with whom ex-SAS soldier Hope has already crossed paths, and will again.

Tom McAllister’s first solo adventure sees him embroiled in a gruesome multiple murder case that has shaken the city of Oxford.
A skilled serial assassin is stalking and executing newly-released child molesters.
As the body count starts to mount up, McAllister finds himself drawn into a deadly game that’s way more than he bargained for . . .

DOES A REFORMED PAEDOPHILE HAVE A RIGHT TO LIVE?
That’s the controversial question many citizens of Oxfordshire are asking when a skilled, ruthless assassin starts targeting newly-released child sex offenders.
Some want the ‘paedo killer’ locked up forever.
Others think he’s a hero.
Either way, now it’s DI Tom McAllister’s job to catch the elusive murderer.
Not your ordinary police detective, Tom’s a maverick outsider who always gets his man.
But with the case spiralling out of control and the killer seemingly always one step ahead, he finds himself drawn into a deadly game of deception that threatens to destroy more than just his career.
But the worst is yet to come, as the horrifying truth begins to emerge about the significance of THE CAGE . . .

If you’re a fan of smart, fast-paced detective thrillers with a twist, the first of Scott Mariani’s sensational new DI Tom McAllister series will have you on the edge of your seat and yearning for more!