The Cadre by Jack Probyn 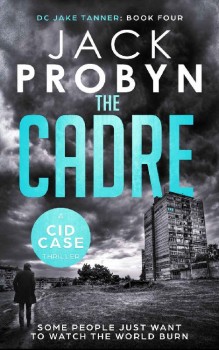 A gangland boss. A modern-day crucifixion. A teenager who caught it all on camera.
Henry Matheson owns the drug trade in East London. To his competitors, he’s feared. To his customers, he’s God. To the police, he’s untouchable.
But when the smouldering remains of Henry’s closest competitor are discovered dangling from a lamppost in the middle of his estate, one man decides to take him on: Jake Tanner.

But he can’t do it alone. And with The Cabal’s clandestine network of corrupt officers threatening him and his family at every turn, Jake doesn’t know who to trust.
Forced with putting his faith in the wrong people, or putting himself in danger, Jake discovers that in the heart of the estate lies a dark secret. And knowing it can get you killed.