The Buffalo Pilot by Lawrence Colby 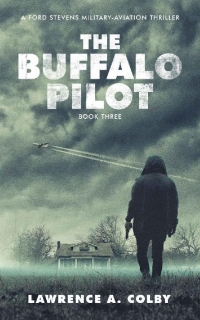 MILITARY FLYING–
THE RISKIEST CAREER OF THEM ALL.
More military pilots die in training than at war.
Air Force Reserve Major Ford Stevens is a veteran military pilot, upholding the prestigious family practice of service to the nation in the face of danger.
His younger brother, Charlie, a fresh Lieutenant out of pilot training, joins the family tradition seeking to prove himself.

With the rivalry still strong, all he wanted to do was follow his big brother’s footsteps…
Now, Charlie joins his brother Ford in the same flying squadron, both men putting their lives on the line each time they strap in the jet, hether in peace or war.
It will be an initiation by fire as they hunt a saboteur killing aircrew, uniting the competitive brothers in the ultimate test of life and death.