The Broken Ones by Carla Kovach 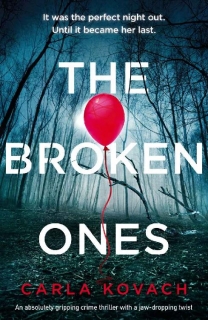 Amber applies a dash of red lipstick and checks herself out in the mirror before heading out on a date. ‘Don’t wait up!’ she calls to her housemates as she leaves. But Amber never returns home that night. Amber Slater is never seen again.

The last person to see Amber was her housemate. He remembers everything she was wearing that night. He watched her leave. He listened to every word of her phone conversation with her friend before she left. He knows more about Amber’s movements than anyone.

At university, she is well-liked by her fellow students and teachers. Her tutor’s voice shakes when he is questioned by the police. Some say he and Amber were very close. Too close. Some say his wife had just found out about their relationship.

Rumours begin to circulate about Amber, it seems that everyone has a story to tell. But when the young girl’s lifeless body is found in a local park, with her blue lips glued shut, the gossip suddenly goes quiet. As the police trace the last few hours of Amber’s life, it seems that the girl simply vanished on her way to catch her bus. And when another woman goes missing in the dead of night, it’s a race against time to find her before she too is silenced forever.