The Bodies at Westgrave Hall by Nick Louth 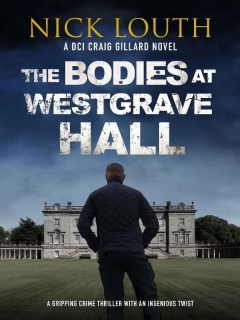 A large country mansion.
A locked room.
A gruesome murder.

Russian oligarch Alexander Volkov has invited 1000 guests to a party at his palatial Surrey residence, Westgrave Hall. But while giving a private tour of the library, a gunman kills Volkov, wounding his ex-wife and slaying her new beau.
Nothing makes sense to DCI Craig Gillard. In the blood-spattered crime scene there are no forensic traces of anyone else involved, CCTV shows no one entered or left the library, and everyone seems to have an alibi.
Is it a crime of revenge, the squaring of a love triangle, or a Russian government operation? Could the victims have simply shot each other? Gillard’s eventual discovery is shocking even to him.
The latest gripping crime thriller from a master of the genre, The Bodies at Westgrave Hall will leave you guessing until the very end.