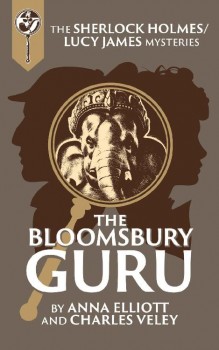 Two wealthy women, now missing. A fashionable swami. And a cruel organization, poised to strike again.
London, 1900. Amy Thiel, a client Holmes assisted previously in the Powder Island adventure, now takes on a leading role. She comes to Sherlock Holmes, not for more help, but for work. She wants to investigate and punish those who wrongly disgraced Inspector Tobias Gregson, the policeman with whom she has secretly fallen in love. Gregson, who loves Amy, also in secret, cannot abide her subjecting herself to danger, especially on his behalf.

But now Holmes has an assignment for Amy. Two women have gone missing. Both were associated with The Institute of the Western Dawn, a fashionable Bloomsbury meditation and enlightenment group run by a charismatic guru. Amy agrees to pose as a new client, in order to investigate. Lucy goes with her. Flynn and Becky also assist, as does Watson and Jack. None of them, not even Holmes himself, can foresee all the perils that lie ahead.